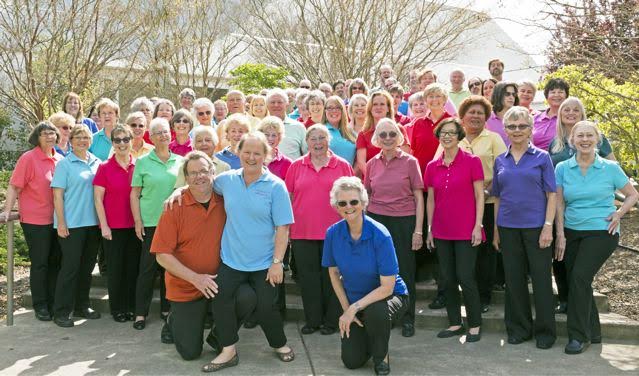 The mission of the Sonoma Valley Chorale is to provide a diverse range of excellent choral music experiences in our community that brings joy, inspires, challenges and educates our singers, audiences, and students.

The Sonoma Valley Chorale had its earliest beginnings in the spring of 1973 when an ecumenical festival combining four choirs performed with 70 singers. From this group, director James Griewe brought together 50 voices for a Vintage Festival Concert, followed by 75 voices for the performance of the Messiah at St. Francis Church at Christmas time. From there, those singers and 21 new people, a total of 96, came together to form the Chorale and continued to perform at St. Francis Church until the last half of their 1974-75 season. The original accompanist was Deanna Smith, who remained with the Chorale for many years. Other assistant accompanists were Pat Bell and Pat Bonnoitt.

With their numbers growing to approximately 160 members, the Chorale moved to the Sonoma Veterans’ Building in 1975 to perform their first concert in that location: “Elijah”. They quickly gained recognition throughout the area for their impressive concerts, directed by the dynamic Jim Griewe. Some of their special presentations were Beethoven’s Ninth Symphony, Poulenc’s Gloria, and Orff’s Carmina Burana as well as many spirituals, show tunes, and operettas.

The Chorale grew to well over 200 people and hosted several celebrity guests, including Maya Angelou, who narrated “Jonathan Livingston Seagull” with the Chorale; Jester Hairston, who conducted an entire concert of his spiritual compositions, and Vermont composer, Gwyneth Walker who created an original work, “Come Life, Shaker Life” for the Chorale.

In addition to their regular concert series each year, the Chorale, under the direction of Griewe, produced and performed several musicals, including “Most Happy Fella” in 1979; “HMS Pinafore” in 1980; “Trial by Jury” in 1985; and “Fiddler on the Roof” in 1987.

Members of the Chorale had the wonderful experience of traveling to Italy and France in 1995 to visit Sonoma’s sister cities and perform concerts for them. Then in 1998 they went to England and Scotland, singing at several churches and cathedrals in various cities. A third trip involved traveling to New England and Canada, performing in many unique venues.

In 2008 a new era began for the Chorale with the retirement of Jim Griewe after 35 years of directing and guiding the group. He was succeeded by David Irvine, who had served as assistant director for the previous five years. David was trained in choral conducting at Chapman College and is an excellent baritone soloist. He brings a wide variety of skills and challenges to the group. He has brought the Chorale three excellent experiences of working with well-known American composer/conductors: Brad Ellingboe, choral director from the University of New Mexico; Mark Hayes, composer and arranger of hundreds of pieces for choral singers; and Rosephanye Powell, acclaimed composer, singer and professor.

In March 2020, the Chorale (and most other singing groups) began a long pause thanks to the Covid-19 pandemic.

And now, in the fall of 2022, the Chorale resumes a new and exciting chapter in its long history under the direction of our new and talented conductor, Travis Rogers. We hope you will be a part of our newest chapter – as a singer, a patron, and/or concert attendee!